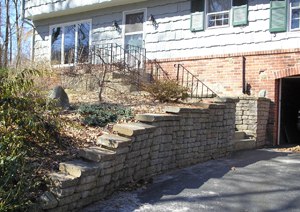 Why are Retaining Walls Falling Over?

There are many reasons why a retaining wall can fall over.

In our industry most, if not all, manufacturers of interlocking block have cross-section sheets on how tall of a wall you can build with their block - in good soils (gravels and sands) and with level compacted backfill. Many times installers will exceed those recommended heights, or there ends up being a slope above the retaining walls which adds a significant amount of extra pressure. If this is the case you have three options: 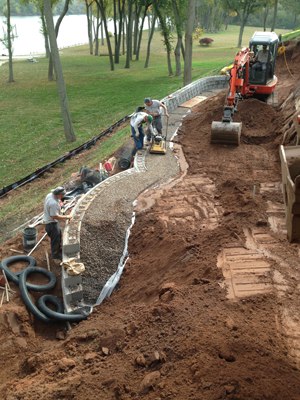 1.  First option would be to cut your soils down behind the top block of your wall so that you have level ground for at least twice the height of your wall.

2.  You also have the option of looking into a different manufacturer of block - someone who builds a larger, heavier block or a multiple cell unit allowing the user to build higher wall without additional soil or backfill reinforcement.

3.  The third option would be to reinforce your wall using geogrid, which is an engineered soil stabilization system. All soils have a fee angle, or angle of repose. (This is the natural angle of slope that a soil will maintain when dumped in a pile.) The easiest way I can explain it is this... if you have ever driven by a gravel pit and seen a conveyer running with soil coming off the end of the belt, the angle you see on those cone shaped piles is the fee angle or angle of repose for that material. Different soils have different angles. Gravels and sands have a much steeper fee Angle than silts and clays. When building a retaining wall you need to build and create a mass of weight that is heavier than the weight and pressure of the soil behind it. By using a retaining wall system and geogrid you can stabilize and reinforce this soil to become a mass heavier than the mass it has to retain. This is a very simple explanation, but there are professional engineers that specialize in designing these wall systems, and will stamp the drawings. This means they will take full responsibility for any job failure as long as the job was built to their specifications.

See the video below for a visual illustration of geogrid.

The base, usually a 3/4" processed gravel, is to be compacted to a density of 95% Proctor, meaning 95% of its natural state. This should be accomplished using some form of compaction equipment (plate compactor, jumping jack or vibratory roller).

You will also need to compact any material placed behind the retaining wall. Most manufacturers will spec at least 12"-36" of clean washed stone as backfill. Note: a perforated drain pipe will also be required to carry any excess water out from behind the walls. The ends of these pipes should see daylight every 40' at minimum. Continue to backfill in lifts as per manufacturer or engineer specs. No heavy mechanical equipment should be used to compact within 2' of the back of wall.

Lack of any of the steps listed above could lead to - and most likely will lead to - job failure.

Water and retaining walls really do not mix. Extreme caution should be taken to divert water away from the top and bottom of retaining walls. Failure to do so will eventually lead to job failure.
We hope this article has been helpful. We truly are sorry to say, many installers do not heed all the precautions listed above, that is why we all have witnessed walls that have failed and fallen over.

When installed properly, these walls will withstand the test of time.